Each spring, you may notice your grocery store end-cap display changes — especially if you live in a city with a substantial Jewish population. Suddenly it’s piled high with boxes of matzo, gefilte fish, and cans of coconut-based macaroons — all marked with the words “kosher for Passover.” But what exactly does that mean?

In short, this label means that the food meets the basic set of Jewish dietary guidelines, making it “kosher” — and then goes even further to accommodate the stricter requirements of the weeklong springtime holiday known as Passover. Here’s a primer for more basic info on the holiday and the Jewish dietary laws that go along with it.

Passover, or Pesach, is the Jewish holiday that marks the Israelites’ freedom from slavery in ancient Egypt, and the “passing over” of the first-born Israelites from harm. Passover begins on the 15th and ends with the 21st or 22nd day of the month of Nisan (which falls in March or April each year), depending on where you live and how you observe.

During this time, Jewish people who observe the holiday reject all unleavened bread; instead, they eat matzo to honor their ancestors who suffered as enslaved people and the speed with which they fled Egypt during the exodus; intent to escape before the pharaoh could change his mind (which he eventually did), they left on their journey before bread had time to rise.

What does kosher mean?

Kashrut is the set of dietary guidelines that govern the everyday Jewish diet; permissible foods are called kosher. Commonly known laws forbid eating certain foods such as pork and shellfish, and eating dairy products together with meat; these foods must not only be consumed separately, but also prepared separately.

As well, animals for meat and poultry must be slaughtered according to specific practice under the supervision of a rabbinical authority; items that meet these standards will be labeled accordingly.

You may see them for sale in a typical grocery store (on both specialty Jewish food products, as well as unrelated grocery items) as well as in dedicated kosher markets. Manischewitz is among the most widely distributed kosher product brands in the U.S.

What does kosher for Passover mean?

This set of guidelines that applies all year long also applies at Passover — and that’s when it becomes even stricter. During this time, all bread products — called chametz — are banished from the diet and from the home.

Not just bread, but any food made from the grains rye, barley, oats, spelt, and wheat, are prohibited. That’s because these grains start to ferment and rise when they come into contact with water for 18 minutes. That said, matzo can be made with these grains as long as the entire baking process is under 18 minutes. Why? Because the Israelites didn’t have time for any leavening of bread.

Not just the bread itself, but products made from prohibited grains, such as beer and pasta, are not permitted. Most alcohol is not permissible, but wine that is marked as “kosher for Passover” has not come into contact with any chametz and is okay.

Packaged foods bear certain symbols (and there are many!) to identify their kosher certifications: If the label doesn’t explicitly say “kosher for Passover,” you may see a circled letter K or U alongside the letter P. Some symbols also feature Hebrew characters, stars, and other shapes.

Each Passover, the Jewish community tells the story of the holiday around the table as part of a ceremonial meal called a seder. This annual retelling includes discussion of the holiday’s symbolic foods — with matzo as the centerpiece of the tradition. 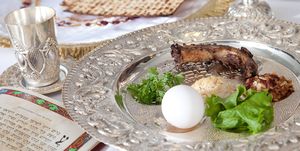 Facts You Should Know About Passover