It’s almost time to ring in the New Year — which of course means lots of fireworks, ball drops and champagne bottles! But while these popular New Year’s traditions have come to be a big part of NYE celebrations every year, there’s one image that’s perhaps the most enduring symbol of the New Year’s holiday: a baby wearing a top hat and sash, otherwise known as “Baby New Year.” But what is Baby New Year, exactly, and how did this popular New Year’s symbol come about?

Often seen as a representation of the coming year, Baby New Year actually has its origins in ancient Greece — and has since then become a popular holiday staple throughout New Year’s history. But if you’re wondering how this age-old (and adorable) representation of the New Year’s holiday came about, here’s a look at the fascinating story behind how Baby New Year was born — and how he came to be such a beloved New Year’s symbol over the years.

What is Baby New Year?

Baby New Year is a popular personification of the start of the new year, symbolizing the “rebirth” of the past year into the next. Usually a male infant wearing nothing else than a diaper, a top hat and a sash (which sometimes shows the year he is representing), Baby New Year is often paired with another mythical figure called “Father Time” — an elderly man carrying a scythe and hourglass who’s depicted as the personification of passing time. As the story goes, Baby New Year will age and eventually grow into Father Time by the end of the year in December, at which time he will then turn over his timekeeping duties — and impart his aged wisdom — to the next Baby New Year born on January 1. 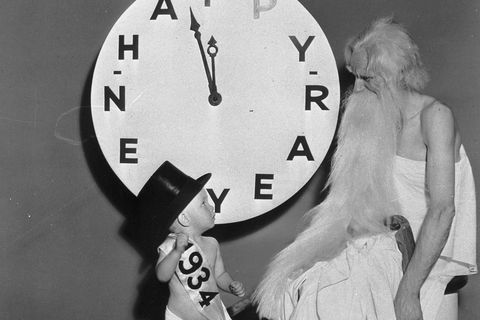 How did Baby New Year start?

According to History.com, the use of a baby as a representation of the new year actually has its roots as far back as 600 B.C. in ancient Greece. In celebrating the annual rebirth of Dionysus — the god of wine and fertility — with each new year, the Greeks had a tradition of parading around an infant in a basket throughout town to represent the god’s birth. Early Christians then also began using the image of a baby to celebrate the new year, with the infant often depicting the religious figure of Baby Jesus.

Baby New Year then became secularized by newspaper cartoonists in the 19th century, most notably with a series of covers in the The Saturday Evening Post by Joseph Christian Leyendecker from 1907 to 1943. These covers featured a different drawing of a baby on every annual first-of-the-year issue, with each character often representing the spirit of that specific year. 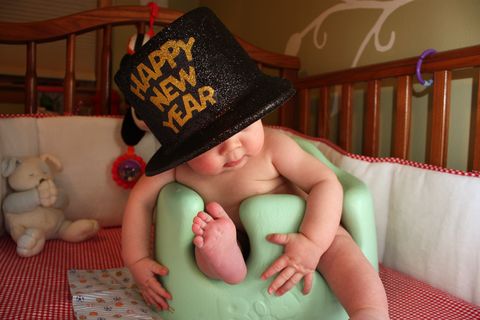 What are some modern examples of Baby New Year?

Since its historical beginnings in ancient Greece, Baby New Year has appeared in countless instances of modern pop culture throughout the years. Most notably, the infant was featured in the 1976 holiday special Rudolph’s Shiny New Year, an animation that chronicles the adventures of Rudolph the Red Nosed Reindeer as he’s enlisted by Father Time to help find the missing Baby New Year. The character has also made appearances in many New Year’s events and celebrations over the years — including Willie Nelson’s New Year’s Eve concerts in Austin, which annually featured cameos by Baby New Year and Father Texas Time, as well as past New Year’s episodes of The Tonight Show with Jay Leno.

Other appearances include the New Year’s Eve celebrations in New Orleans, where for 16 years the city celebrated the holiday with a giant paper mache baby placed on top of a roof in Jackson Square to be dropped along with their beloved fleur-de-lis symbol — their own unique version of the Times Square’s ball drop. 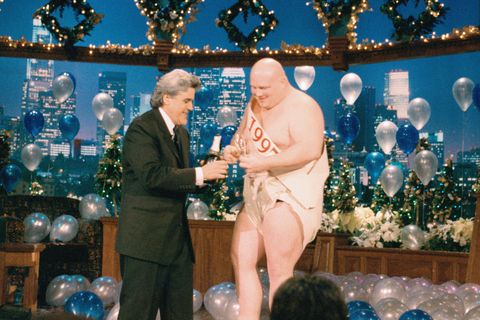 What are other traditions associated with Baby New Year?

In addition to being a mythical figure and a common character in pop culture, the “Baby New Year” label is also sometimes given to living babies, with many cities and towns having the tradition of honoring the first child born that year as the Baby New Year. Often times, this lucky newborn receives lots of fame and media attention, and, in many cases, wins special gifts from local hospitals and media stations — with common prizes being gift baskets and certificates, saving bonds and even free diapers. Last year, New York City’s first baby of 2020 was born exactly at midnight on January 1!